My toenail has cracked at the bottom. It is like when you tear or crack a chunk off off your finger nail. It is ugly, ragged but doesn't hurt a ton. Same with the toenail crack. It is unusual because toenails, or at least my toenails, seem to be very thick so for it to crack would take a lot of force. And the crack is not on the outer edge which comes in contact with the largest variety of circumstances.
I know how this came to be. Remember November? Who doesn't? Santa Claus but he was busy. Anyway, I wore shoes that were constricting for four weeks and developed bruises underneath my large toenails on both feet on the outside edges of the nails. The bruises were cool in the way that watching surgery is cool. They didn't hurt so I figured it wasn't a problem. Well, before I left on my cruise I painted my toenails to so unsuspecting strangers would not be intrigued by my bruised nails and wonder what kind of pedicures I got.
All was well and good with my disguised feet until I went snorkeling (which is a whole blog on its own) I think the flippers ran across my feet at the luckiest angle and with the swimming and the fluttering I cracked the bottom of my toenails. At least the cracks match about  a quarter of an inch in from both sides are little cracks. I had no problem with the cracks until in my own arcaic) toenail clipping (I just ripped them off my hand), I pulled the whole side of the toenail up. I didn't pull it all off completely but it is extremely tempting. I have a toenail doorway right now. I like to look under it. When I was on the cruise sand would get under the toenail. I hope that in time my toenail would turn just one lucky grain of sand into a pearl. Pedi-pearls.
Posted by Heather at 10:16 PM No comments: Links to this post

Last week in preparation for my cruise in the Caribbean I purchased
Four boxes of generic Dramamine
Three types of sunblock with SPFs from 45 to 55
One tube of sunless tanner
Obviously, I want to avoid the sun but look like I don't. I am a bit insecure.
Posted by Heather at 8:08 PM No comments: Links to this post

Today, I flew too close the the sun and my wings melted. I had four bags in my car to carry inside. Part laziness and part over confidence I thought I could take them all in at once. I slung the book bag over my shoulder (I need to point this out now so you don't later, no, it was not a backpack or I would have put it on my back), tourniqueted my wrist with the plastic bag and grabbed the handles on one of two paper bags. Success so far. Then I went for the final bag. I miss aimed and only grabbed one of the handles and with my amazing strength ripped it off. This ruined my easy cargo transportation. I still thought I could do it. I braced myself, grabbed the bag by the side and tried to pull it into the crook of my arm. The weight of the bag caused it to fall backwards which made me let go and try to "re-catch" the bag as it fell. The bag missed my hand slammed into the ground and started bleeding Fat Free, non-BGH-treated milk all over the subzero parking lot. I watched in fascinated horror as the milk rivered away my blueberries, I had so fondly admired for their french subtitling of bluets. My bluets! I quickly removed the salvagables from the milk soaked bag; a wet mango, lacerated avocado and a drippy sack of cilantro. By the time I had set down all my other bags and attended to the wet bag, the spilled milk had  started to freeze on my hands and the parking lot.  Best story ever.
Posted by Heather at 7:52 PM No comments: Links to this post 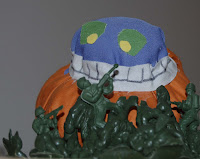 Looks like I have a calling. Inconvenient Monsters: Scrappily and crappily made. This one is rather ominous since the soldiers are melting in fear. Maybe it is the hideous color combinations. He is  a blob with no arms or legs and a drawn on mouth, so what is to fear boys? Maybe he is so fat he had is mouth wired shut and they are afraid that he is so hungry that he will eat them anyway by straining them through the wires and sucking them between the small crevices of the teeth were only floss fits.
Posted by Heather at 7:02 PM No comments: Links to this post

Lizard on a Stick

Merv, the reverse snowbird, has embraced his new residency with great relish showcasing his own Minnesota pride by being Merv on a Stick. Next thing he'll take up ice hockey and elongate his o's.
Posted by Heather at 6:58 PM No comments: Links to this post

Saw the movie had to read the books

Beautiful.
Cried.
Made me want a cat.
So I guess that makes two pussies.
Posted by Heather at 6:44 PM No comments: Links to this post

The Inconvenient Monsters go to the Park 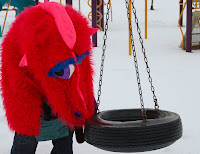 Today, the inconvenient monsters and I went to the park. They had a great time trying to play on all of the park toys. Alas, disappointment set in when they discovered that many playthings required arms.
Posted by Heather at 10:20 PM No comments: Links to this post

I have unexpectedly become the primary caregiver for an anole. It's a lizard. I call them sidewalk lizards because when I was in Florida they were all over the sidewalks. Hence, sidewalk lizards. Merv Griffin is pretty small. He hitched a ride out of dodge on a load of plants. I, being either soft-hearted, defiant or non-murderous, saved him from the destiny of the underside of an intentional shoe. It was either death or live with me. Make your own joke here:

I spoke out against his execution and thusly, am now responsible for his life.
When I was trying to prevent his death, my goal was not to become his custodian. I am sure this is a metaphor for something about why people don't speak out on things. When you do protest things you become responsible. In my case for a lizard but there could be worse things to be responsible for, like trans fats.
Posted by Heather at 3:10 PM 1 comment: Links to this post